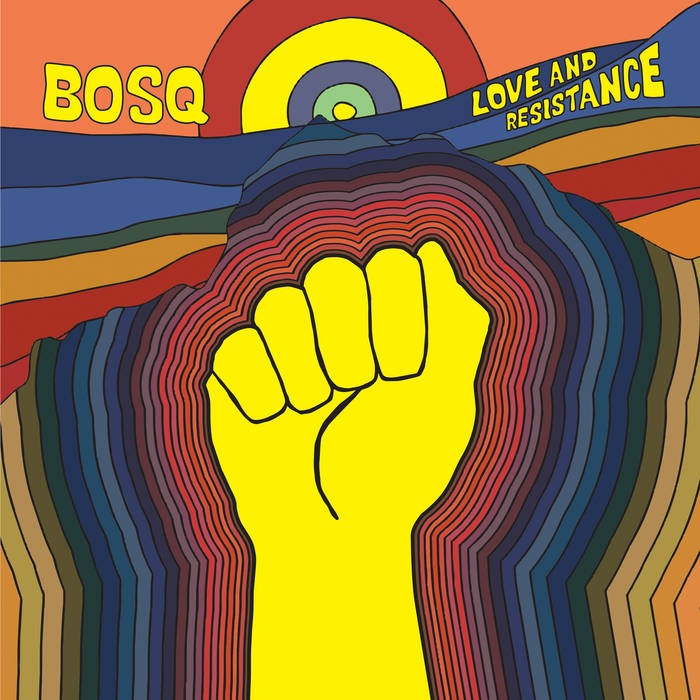 champtracks This album has been one of the sounds of my summer - the positive vibes are plentiful throughout. Addictive hooks, strong beats, rolling percussion, silky synths, great stuff! Favorite track: The Love.

Bosq’s aptly titled third full-length effort “Love & Resistance” is a collection of songs that reflect a producer’s continuing emergence by diving deeper into his influences. The strains of Afro and Latin flavors are interwoven and still heavily permeate but the underlying groove and rhythms have taken on a more modern, jazz-funk and disco-soul vibe with nods to Bobby Caldwell, Roy Ayers, the Mizell brothers and Nile Rodgers’ Chic.

Originally based out of Boston, MA but now calling Medellin, Colombia home, Bosq's new surroundings have inspired him to create his most diverse and creative album to date. Already featuring the top tune “Can’t Seem To Hide” with Megan Doherty that made a splash off the gates as the first single from the album (10/10 rating from Mixmag), the whole album is soldered together with each track being a single-worthy release in it’s own right. Featuring guest vocalists on all but one of the tunes including frequent collaborators Kaleta, and Nicole Willis, along with Ray Lugo who’s known for his work in Kokolo and Boogaloo Destroyers. LA based singer Induce and new duo Lucid Paradise (E da Boss & Ishtar) along with vocalist Bruno Morais whose classic Brazilian voice is reminiscent of Jorge Ben round out the cast of Bosq’s most vocally varied album work to date, reflecting both his growth as an artist and his willingness to push his own sonic boundaries.

A relentless work ethic fused with a broad and varied music palette all attuned to the groove and a focus on making folks move has led to numerous remix projects, most recently with legendary Benin-based Orchestre Poly-Rythmo De Cotonou. With a steadily growing fan base and reputation amongst fellow artists and musicians, Bosq’s immediate future is already laden with releases lined up for Fania and his collaborative effort Body Music alongside The Rapture’s Vito Roccoforte.

Bosq has been tirelessly exploring the intersections of Afro-Latin music with Disco, Funk, Reggae, House and Hip Hop for years. With three full albums released on Ubiquity Records, bosq y orquesta de madera & celestial strut, an EP on Soul Clap Records Tumbalá and an LP recorded with the Candela All-Stars in Puerto Rico San Jose 51 the fruits of those labors are beginning to show in abundance. ... more

Bandcamp Daily  your guide to the world of Bandcamp